This caps off my 3-part discussion of the way information was presented at the 7/24/19 congressional testimony of Special Counsel Robert S. Mueller, III. Exploring the format of the televised public forum provided a substantial amount of examples to highlight similar challenges in the courtroom. Recall we presented an alternative way information might be arranged on “Slide Six” to further a speaker’s points: http://bit.ly/2knW6VS. With readability and aesthetic in mind, adhering to the important design tenet “form follows function,” comprehension and effectiveness will win the day.

There are many nuanced and unique ways to think of courtroom visual presentation that distinguish it from other public forums of communication like a congressional hearing. One often overlooked is choreography, how a visual is going to be used rather than what the graphic is. Along this vein, perhaps the courtroom can inform congressional hearings.

When Ill. US Rep Mike Quigley questioned the former Special Counsel Mueller on 7/24/19, he used as a backdrop, a poorly executed arrangement of torn page illustrations of quotes (see Slide 6 below). That backdrop was static and did not enhance the 90 seconds of Illinois U.S. Rep. Mike Quigley’s questions surrounding its content, but rather likely detracted from them. That quick series of questions provides a discrete setting to discuss how visuals can serve to enhance a “Q and A” session rather than decorate, blur or defeat its purpose altogether. 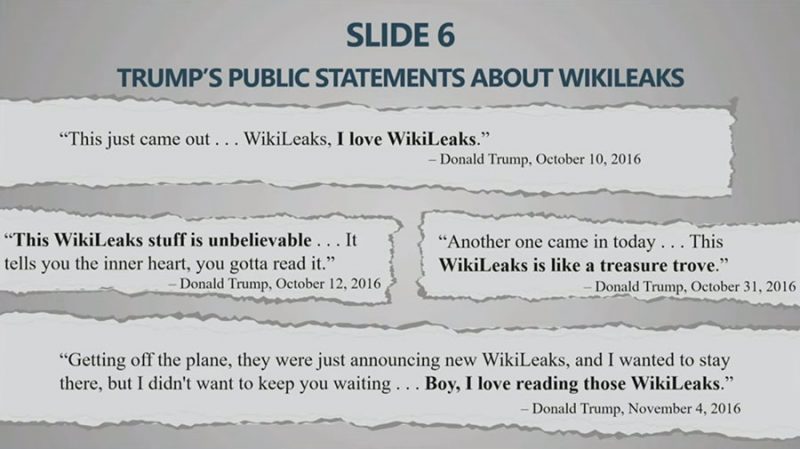 Below is the transcript from 90 seconds of questioning, using our redesigned “SLIDE 6.” Near each point, we have presented an alternative, more effective way to solicit and deliver testimony. Addressing items one at a time in order to focus everyone in the room on the same thing is an effective method that seems easy at first. After all, isn’t that likely why those torn excerpts were placed on one slide in the first place? The Federal Rules of Civil Procedure call for summaries of voluminous information and data, which helps the factfinder reach decisions. Until you try to coordinate the information with the process. Often in court this simple point is overlooked, because lines of questioning get complicated fast and both attorneys and witnesses go off script.

The intent here is to initially present in toto, with attention to the esthetic. This would set up the witness with context while giving weight to the authenticity of the information presented. A decision to “build” one by one, each of the quotes would be an additional way to focus the room and the witness on the context for the question about to come. And, once it does, the slide with all four quotes would be repeated. 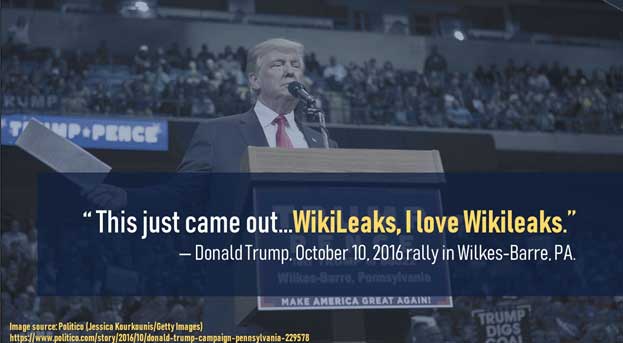 “This Wikileaks stuff is unbelievable. It tells you the inner heart. You gotta read it.” Donald Trump. October 12th, 2016. 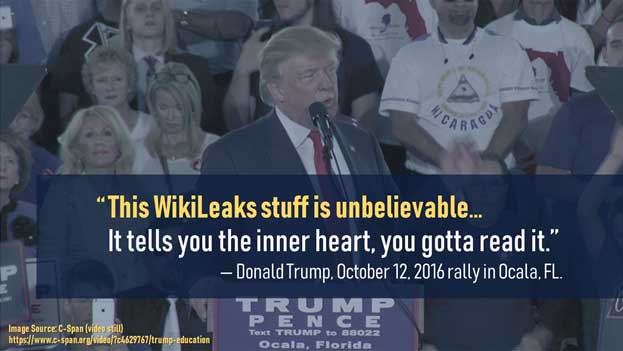 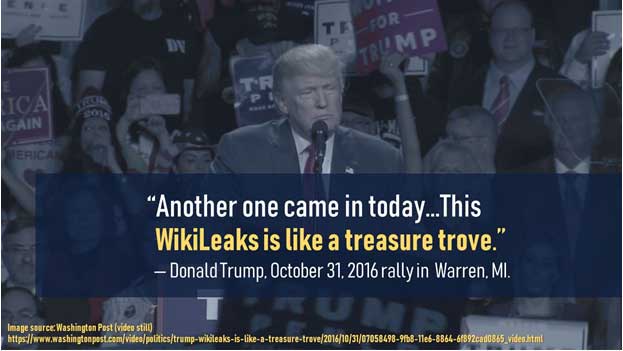 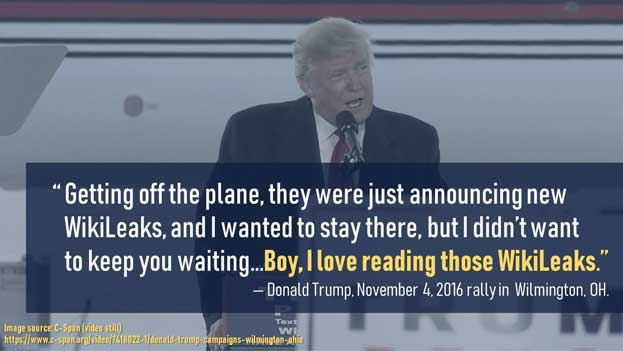 Would any of those quotes disturb you, Mr. Director?

I’m not sure I would say- 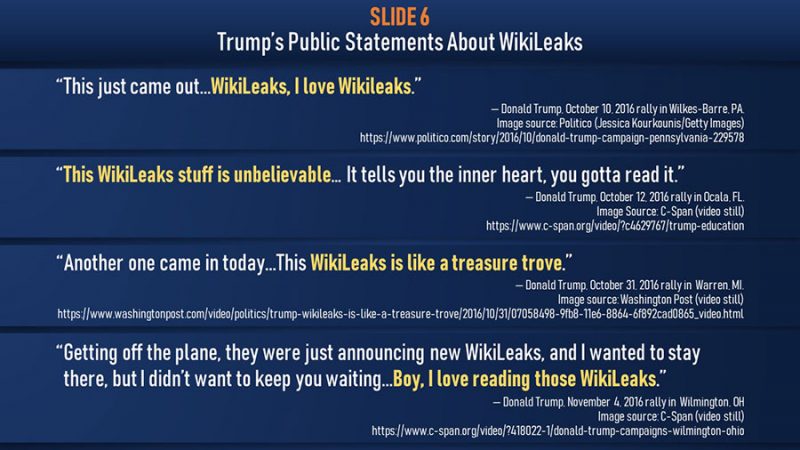 How do you react to that?

Well, it’s problematic is an understatement in terms of what it displays in terms of giving some, I don’t know, hope or some boost to what is and should be illegal activity.

Here was a perfect opportunity for Congressman Quigley to command the visuals to further his line of questioning. It may have helped if he acknowledged the display of information and asked for it to be removed as he moved to another Report excerpt. Instead the demonstrative remained on display uncoordinated with the coming question. This is problematic for a few reasons. The most important of which, is that if you are going to read from something, either display it (and remember with the right preparation any paragraph in the report could have been on display and highlighted with instant key strokes) or display a black screen (see below). Displays definitely lose their effectiveness if they are ignored.

Volume one, page 59 Donald Trump Jr had direct electronic communications with Wikileaks during the campaign period. 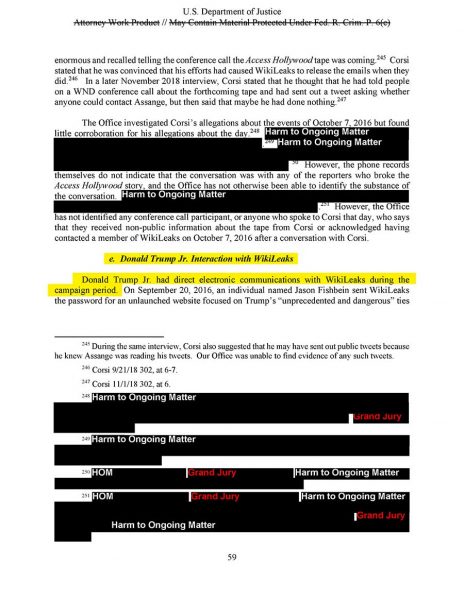 On October 3rd, 2016 Wikileaks sent another direct message to Trump Jr asking you guys to help disseminate a link alleging candidate Clinton had advocated a drone to attack Julian Assange. Trump Jr responded that quote “He had already done.” Same question. This behavior at the very least disturbing? Your reaction? 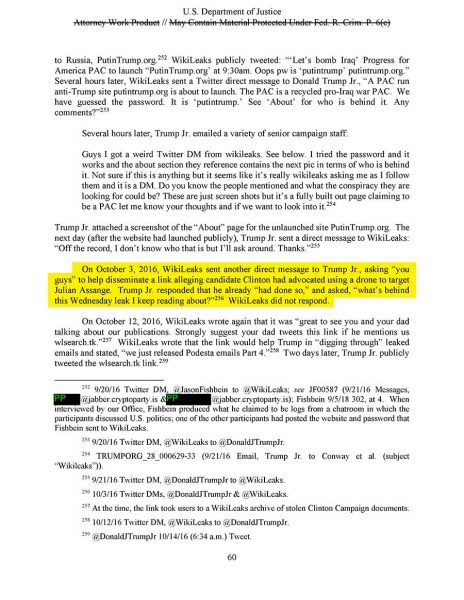 It disturbed me. It’s also subject to investigation.

And here, the screen should have gone black to bring attention back to the witness. I have written about the underused power of the black screen here.

Looking back, in the way many jurors must when it is time to deliberate, important points that were accompanied by visuals are often more significantly cited and perhaps better understood. Mock Jurors will quote from the images, and the group will often eventually (and unwittingly) “get it right” by comparing their different recollections and then calling for the actual chart (if evidence) or demonstrative (if admitted). This serves to embed the information on a deeper level into the minds of jurors committed to the critical thinking task at hand.

The more interaction and coordination with your visuals (which takes additional, brave effort), the more persuasive your message will be to decision makers.