I was recently moved by a quote attributed to Abraham Lincoln, in a book about his last courtroom case before being elected president.

“When I have a particular case in hand, I have that motive and feel an interest…in ferreting out the questions to the bottom, love to dig up the question by the roots and hold it
up and dry before the fires of the mind.”1]

That is how it feels to delve further into the congressional hearings that occurred on July 24, even as public attention to it and press coverage wanes. I chose these two photos because I suspected that the views not captured on televised broadcasts and reporting coverage would inform more precisely about the nature of the hearing. They fed my initial instinct to look deeper and compare it to the process of courtroom procedure.

I wanted to see what the witness saw. I aimed to put the whole affair and its subsequent commentary into a context prompted by my many hours spent in almost as many different courtrooms. When considering similar quandaries of courtroom communication, comparing these two forms of public forum led me to compare and contrast each. This served to further enlighten my understanding of both.

So it was that I watched the usage of large screen visuals with curiosity. Perhaps my questions are more informative than the answers. The screens on the sides of the room were raised high and in no one’s direct line of sight during the testimony. Do they help or hinder the task at hand? Or did they serve merely to aid the audience in keeping up with the questions when something was displayed? The layout of the room was another stark contrast as the witness sat lower than the questioning authorities. In court, witnesses sit higher than the questioning attorneys and often slightly lower than the judge. Basically the opposite of the congressional hearing setup. Why? 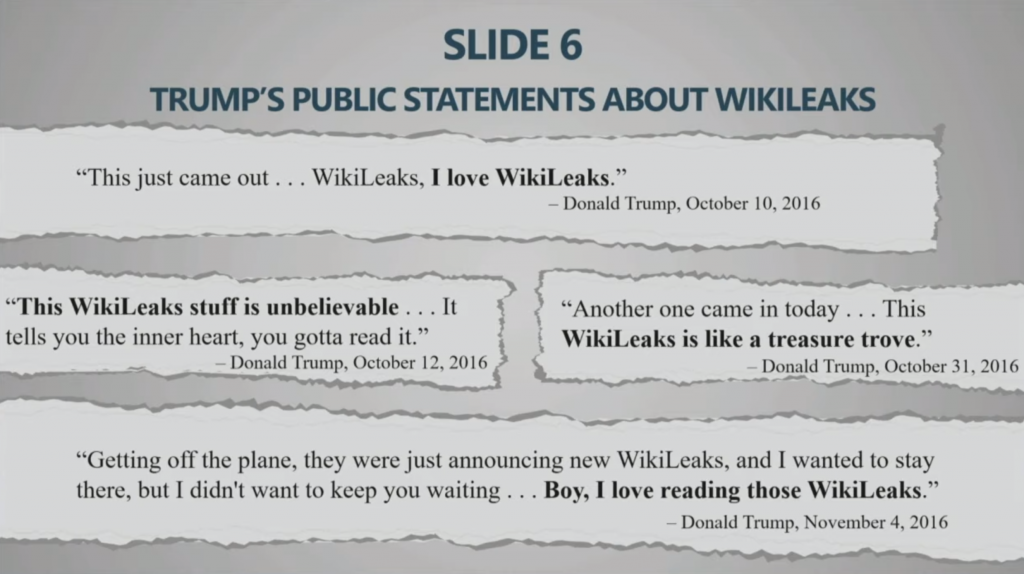 The ripped page excerpts (titled “Slide 6”) above, on a light background with light gray outlines didn’t seem helpful to the witness or committee members (nor did the ripped page art effect). Pale background, gray borders, with no visible cites to the quotes was appalling. In many courtroom scenarios, visuals must be called for by their assigned exhibit number directed by one examining attorney (or in some cases the judge), in order that the record be clear. Sometimes they are even described in addition to referenced by pre-assigned trial exhibit number to help the speaking attorney or witness interact with and validate the visual
– lest it be mere decoration. 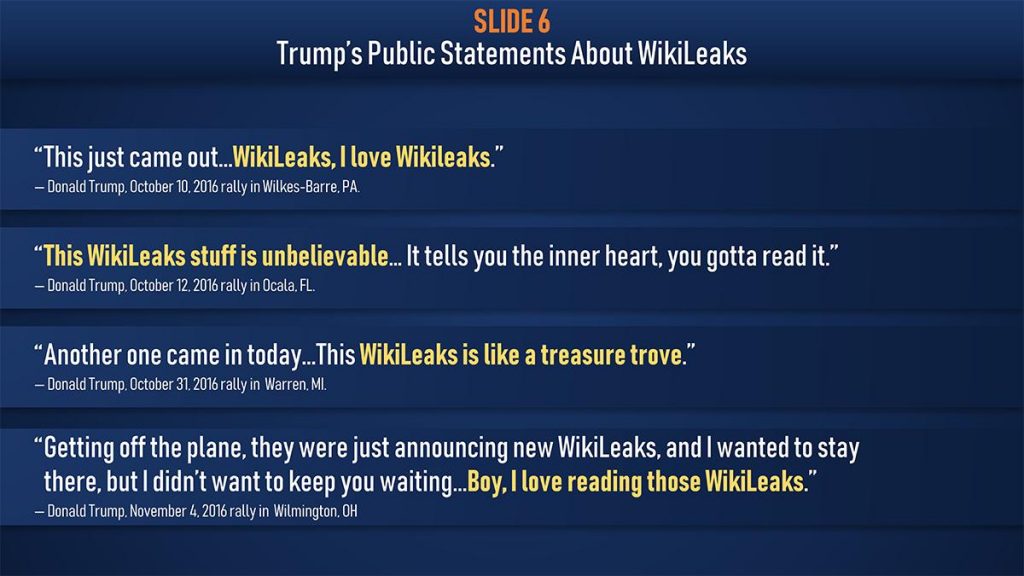 So, while I was relieved that “Slide 6” seemed to help coordinate the presentation of evidence, I was appalled that there was hardly attention paid to the content or construction of the information. Excerpts to be read, seemed hastily concocted with size and boldness (typeface weight) chosen over readability. Most importantly, there was no cite under each except the president’s name and date. This sort of omission contributes to the tendency to “swat away” any inconvenient evidence. Making sloppy claims to quotes attributed to witnesses undermines the credibility of the accusation if attempted in the courtroom. One of the ways we avoid this is illustrated above.

When I began down the path of using the public hearing as a way to discuss courtroom visual presentations, I did not expect so much material on which to pontificate. I will close this sub-series in the next post.