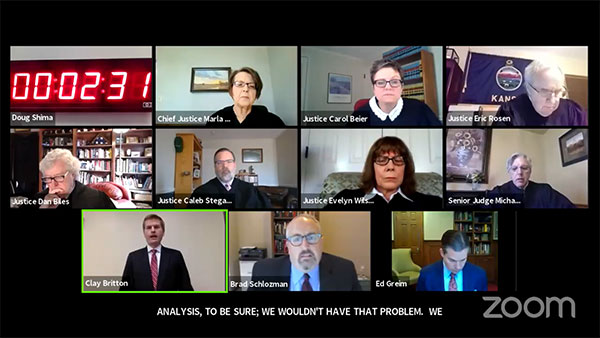 Despite feeling “zoomed out” by an overnight global dependence on video conferencing as a substitute for in-person activities, I admit to being excited by the live broadcast of the Kansas State Supreme Court emergency hearing on April 11, 2020, the day before Easter.

Technically speaking, it opened with the timer window and a voice: “The honorable justices of the supreme court, hear ye, hear ye, hear ye, all persons having business before this court are admonished to draw nigh and give their attention to the court.” Then the thumbnail windows appeared (timer clock, 7 justices and 3 counsel). The justices were in their robes and for the most part in clear view of their cameras.

Clay Britton, chief counsel for Kansas Governor Laura Kelly stood for his opening remarks, which I found admirable and effective (and often overlooked as a good practice for this type of presentation). The decision to use Zoom, but to broadcast through YouTube was also confidence-instilling given the hacking vulnerabilities of zoom.

Chief Justice Maria Luckert opened session with: “Today is a historic day as we hear arguments for the first time by video conferencing…. Kansas courts are operating under emergency orders to protect the health and safety of litigants, the general public and our employees and judicial officers.” The austerity and formality of the courtroom was established and maintained throughout the hearing. Unlike the ABA report of a frustrated Florida judge who commented on the lack of professional attire on the part of two attorneys appearing before him by video, all the participants seemed to be on the same respectable page.

The justices and counsel stayed attuned to each other’s time speaking and yet there was lively exchange of words. I had suspected this would be less than optimal given the possibility of lagging video or audio depending on connection speeds that seem to continually fluctuate wherever you are in the wifi universe.

Instead I was pleasantly surprised by the back and forth. Perhaps the lesson here is that with the right setup, preparation and patience, our system of justice is capable of adapting in ways that will forever be remembered as vital to our rights and responsibilities as citizens. And if it takes a pandemic to remind people that we each have a role to play, well then, so be it.