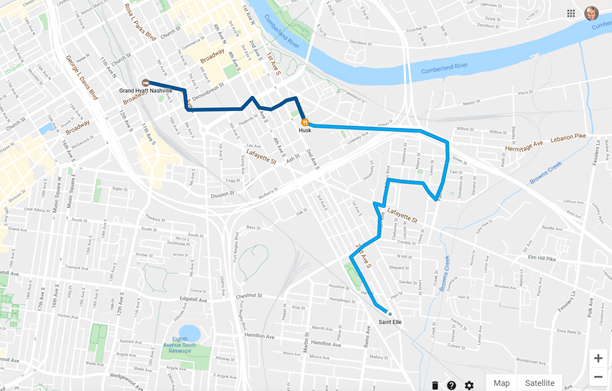 The path of the phone after it was stolen is represented by the light blue line thanks to Location Sharing.

I started the year exploring and detailing our practice of creating visual timelines to help litigants tell their story to juries in complicated civil disputes. Closing the year where I started seems fitting. Especially since it hit home as events often do, when I was robbed at gunpoint in Nashville this past October along with two business colleagues. In the aftermath, we needed to convey the sequence of events for police investigators. [My stolen phone kept sending its location for many hours after thieves absconded with it.]

Often our client witnesses who prepare the best way to tell the story of their dispute are coming from places of trauma. Perhaps not the violent kind, but certainly the heated emotional kind of stories that leave parties feeling wronged, emotional, shaken and vulnerable. Thankfully our work has avoided that category of litigation consulting, though, our kinds of services are vital in that regard. Still, it occurs to me that any level of trauma affects the details for the witnesses we prep, making our role in reaching clarity and accuracy in the retelling significant. Events in the driest of cases hold some level of trauma for the key players, sometimes clouding the clarity needed to weave a proper narrative.

If more than one player in a story takes pen to paper, the facts are challenging to synchronize perfectly. No two people tell the same story, exactly the same way about the same events in the best of circumstances. Among many reasons, trauma can be a stealthy culprit. Listening to my friends as we collectively tried to piece together the events for the police that night and our own recovery in the weeks that followed, I was astounded at how different our recollections were. One detailed account affected another. One image produced another in my mind’s eye. I found an image of the restaurant, which made it  somewhat more vivid when reconstructing the events.

As I listened to their accounts, I gave in and agreed on significant details like the number of people who were in the group that robbed us (I initially thought 3, another of us thought 6 or 7 and as I reflected, I think the latter number is more accurate when I think about how the events unfolded that night). We were swarmed and lulled into security because we stood outside a restaurant that had patrons on the porch having dinner. We felt “safe.”

Thanks to Google, I returned to the scene of the crime, which had an interesting effect on the way I processed what had happened to us. Stay tuned for number 19 of 21 for 21.