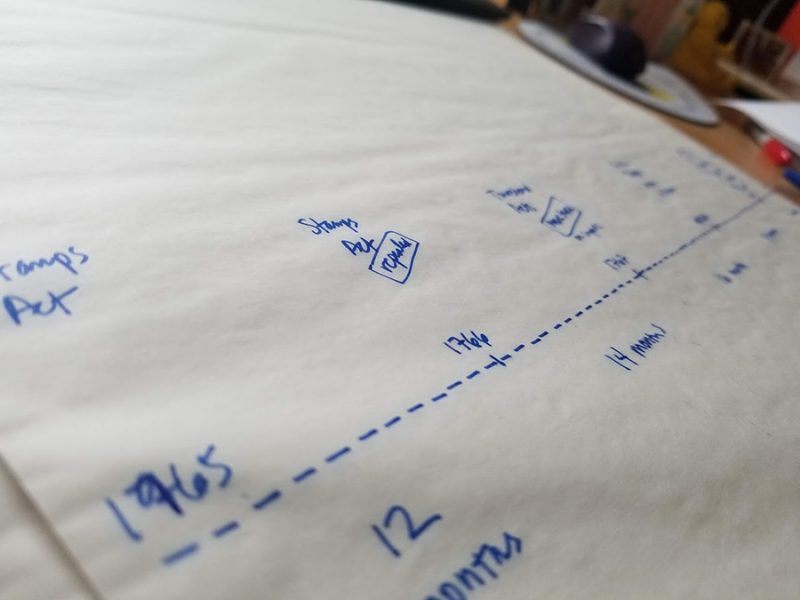 While preparing to present to a Massachusetts Academy of Trial Attorneys (MATA) Roundtable, I was struck by a confluence of events.

First, I had just finished a book that delved into the 1770 Boston Massacre and the subsequent jury trials that followed (Dan Abrams, John Adams Under Fire, Hanover Square Press, 2020). Secondly, I had recently helped a trial team present a civil case to a jury in Boston so my presentation to MATA was particularly well poised to apply some local anecdotes. Finally, I am in the middle of a focused series on the use of timelines in presenting civil cases to juries and judges, so naturally I wondered how John Adams might have used a visual timeline during trial in 1770.

In an effort to connect some dots, I took pen to paper, to show rather than tell my new friends in Boston how we approach visual communications in the courtroom. The process begins with more questions than answers. In order to provide a worthy defense, Adams would have had to provide context (and in fact did). We would have recommended a timeline for the arduous task of collecting and interpreting eye witness testimony that fills 200+ year old transcripts of those trials. The events that led to March 5, 1770 – what is now called “the Boston Massacre,” (or the “Incident on King Street” as it was reported back in England at the time) were vital to understanding the event itself and would provide a worthy backdrop upon which to place each witnesses’ testimony. That would require identifying the span or “universe,” words we use to determine the parameters, the basis upon which we build a story.

If we begin with the Stamps Act of 1765 that sparked reactions and tensions among the colonists that were exacerbated by the arrival of British soldiers in 1768, it would become obvious that the 17 months between their arrival and the shootings could be used to inform one’s understanding of how the events unfolded and perhaps made the massacre seem inevitable. It’s the longest period of time in the story. One might not see the significance at first glance. If only a list or oral recitation was used to convey the details without the use of visuals, the story doesn’t become obvious the way it might if one could see as well as hear the details and nuances.

This is just one example of the benefits of visualization in understanding events in time in the context of a party’s story.