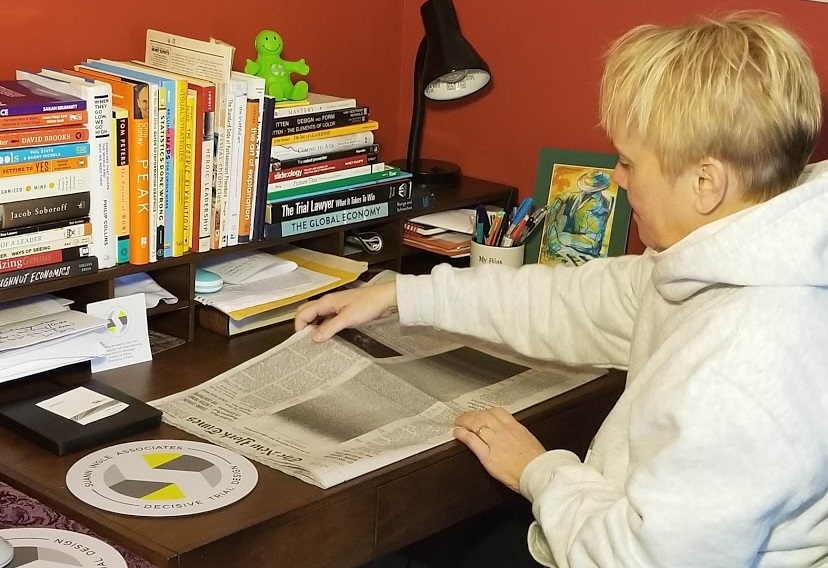 The New York Times recently marked a grave milestone of 500,000 U.S. deaths from SARS-CoV-2 with an innovative approach to visualizing the toll thus far (see link below). Filling a vertical timeline with a black dot for every death to scale in time from the top down was ambitious and front page worthy. I was so moved by the “at a glance” impact that I immediately drew connections to the choices we make when “visualizing” evidence in civil litigation disputes.

I broached the topic during Sunday dinner with my family, to a number of distinct reactions, none of which satisfied my curiosity about simple aspects of the chart and whether there was a relevance at all to the work we do designing visuals for courtroom settings. Granted, I often hear that I bring work home too much, but still I pressed them.

Did they agree that time should start at the top and run down the page or would it be more intuitive and accurate to mount the dots starting at the bottom?
No, it was probably more practical for printing to start time at the top. Or maybe it was better for mobile apps to start at the top (or both).

Was it intuitive to understand that time ran downward, rather than upward in this static illustration?
They were intrigued and started to wonder more about the purpose of the illustration and reasons for the labels in red on the side but didn’t find the orientation as disorienting as I did.

How did the chart make them feel about understanding the information?
Wow, deaths are surging (dots saturating) within shorter periods of time now more than ever.

“…each of the nearly 500,000 individual dots represents a life lost in the United States to the coronavirus. Talking about the death toll, Lauren Leatherby, a graphics editor on the project, said the visual reflects ‘the sheer speed at which it was all happening.’” The New York Times

In a courtroom presentation setting, I might turn the vertical on its side to show the progression of time and the subsequent increased frequency of deaths horizontally the way I think people perceive events in time best. This slight change in orientation, might help a speaker convey the point in an interactive way.

Either way, for me it did more than communicate speed. The saturation of the most recent period reminded me of the centuries old sentiment, “darkest before dawn” and renewed my commitment to urge those around me to do their part, to help avoid becoming a dot, or inadvertently helping to cause a dot.